The 2013 William McKinley Presidential Dollar (Buy on eBay) began the seventh year of issuance for the ongoing Presidential $1 Coin Program. This represented the twenty-fifth release for the series, which had undergone some changes since its initial launch. 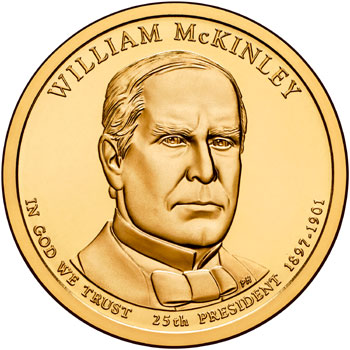 Starting in the previous year, production of the $1 coin for circulation was halted due to increasingly large stockpiles held at Federal Reserve Banks. The United States Mint would continue to produce circulating quality versions of each coin, however these would only be distributed within numismatic products at a premium to face value. The newest releases of the series would no longer be available from banks at face value.

William McKinley had served in Congress for a period of 14 years and then served two terms as the Governor of Ohio before being elected President. He served one full term and was re-elected for a second, which was cut short when McKinley was assassinated by an anarchist. His Vice President Theodore Roosevelt would assume the Presidency.


The obverse design of the William McKinley Dollar features a portrait of the former President designed and sculpted by Phebe Hemphill. The inscriptions include “William McKinley”, “In God We Trust”, “25th President”, and the years served “1897-1901”. The reverse design features a rendition of the Statue of Liberty, which has been used in common for the entire series to date. Incuse edge inscriptions include the date, mint mark, and motto “E Pluribus Unum”.

The United States Mint opened sales for circulating quality examples of the William McKinley Presidential Dollar starting on February 19, 2013. The coins were available from either the Philadelphia or Denver Mint facilities, packaged in 25-coin rolls, 100-coin bags, 250-coin boxes, and 500-coin boxes. A total of 9,940,000 circulating quality coins would be produced across both facilities.

Collectible proof and uncirculated versions of the coin would also be incorporated into other numismatic products offered by the US Mint.