The James Garfield Presidential Dollar (Buy on eBay) was released into circulation on November 17, 2011. This marked the 20th release of the series honoring the former Presidents, and wrapped up the fifth year of the series. 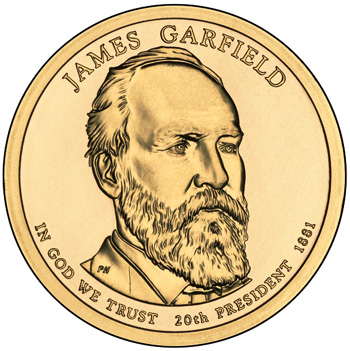 Prior to being elected president, James A. Garfield was elected to the Ohio state senate and elected to the U.S. Congress, where he would serve for 18 years. He would only serve as the President of the United States for a brief 200 days, the second shortest tenure after William Henry Harrison. Just four months into his term, he was shot while entering a railroad station in Washington, D.C. One of the bullets would remain lodged near his spine and cause him to become increasingly ill until he eventually died 80 days later.

The obverse of the James Garfield Dollar featured the former President’s portrait with inscriptions indicating his name, the motto “In God We Trust”, the order of the Presidency, and the year during which he served. The reverse carried the design common to all issues of the series depicting the Statue of Liberty with inscriptions “United States of America” and “$1”. The edge of the coin included the date, mint mark, and motto “E Pluribus Unum”.

The designer and sculptor of the obverse was Phebe Hemphill, while the reverse was designed and sculpted by Don Everhart.


An official launch ceremony for the James Garfield Presidential Dollar was held on the circulation launch date at the James A. Garfield National Historic Site, located at the 20th President’s family home. The ceremony was attended by United States Mint Acting Associate for Manufacturing Marc Landry, Rudolph Garfield, a great-grandson of President Garfield, and Dr. Allan Peskin, professor emeritus of history at the Cleveland State University and author of “Garfield,” the definitive biography of James Garfield. Although it was not known at the time, this would be the last official launch ceremony held for the program.

The total mintage for circulation reached 74,200,000 pieces across the Philadelphia and Denver Mint facilities. Notably, this would be the final issue of the series produced for release into general circulation. The subsequent issues of the series would only be issued within numismatic products offered by the United States Mint at a premium to face value.