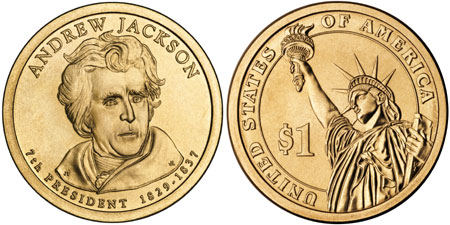 Andrew Jackson fought in the Revolutionary War and was a hero in the War of 1812. As President, he worked to strengthen the executive branch of the government, vetoing more bills than the prior six presidents combined. He served two terms as the 7th President of the United States from 1829-1837.

The official launch ceremony for the Andrew Jackson Presidential Dollar was held at the Hermitage near Nashville, Tennessee. This was President Jackson’s former home. The United States Mint Deputy Director Andrew Brunhart and the past regent of the Hermitage Board of Directors Richard Cowart were in attendance. A ceremonial “coin pour” of new Andrew Jackson Dollars took place. The public was invited to exchange their paper dollars for new dollar coins.

The obverse includes the inscriptions “Andrew Jackson,” “7th President,” and the years of his presidential term “1829-1837.” The reverse inscriptions include “United States of America,” and the denomination “$1.” The date and mint mark are located on the edge inscription of the coin along with the mottoes “In God We Trust” and “E Pluribus Unum.”