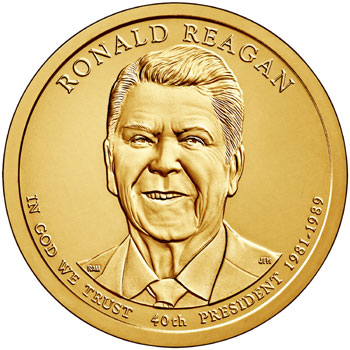 In the years leading up to the release, there had been some uncertainty as to whether Reagan would be honored within the series. The authorizing legislation stipulates that in order to be eligible, a President must have been deceased for at least two years and Presidents are to be honored in the order served. Although Regan met the first requirement, honoring him on a coin would arguably place the Presidents out of order since President Carter would be skipped. The uncertainty was finally put to rest in 2015 when the United States Mint produced eight different design candidates for the Regan Presidential Dollar to be reviewed by the Commission of Fine Arts (CFA) and Citizens Coinage Advisory Committee (CCAC).

The final design selection was eventually unveiled on February 6, 2016 at the Ronald Reagan Presidential Foundation and Library annual birthday celebration. The obverse design, which was supported by both the CFA and CCAC, features a front-facing portrait of the former President as designed by Richard Masters and sculpted by Joseph Menna. The surrounding inscriptions read “Ronald Reagan”, “In God We Trust”, “40th President”, and “1981-1989”.


The reverse of the coin, which was designed by Don Everhart, features an image of the Statue of Liberty intended to represent the concept of Liberty. The inscriptions include “United States of America” and the denomination “$1”. The edge of the coin includes incused lettering with the date, mint mark, and motto “E Pluribus Unum”.

The United States Mint offered circulation strike versions of the Ronald Reagan Presidential Dollar within numismatic bags and rolls starting on July 1, 2016. The coins were available in 25-coin rolls, 250-coin boxes, and 100-coin bags from either the Philadelphia or Denver Mint facilities. The canvas bags or paper wrappers for the rolls were clearly marked with the name of the President, mint mark, and face value of the contents. Following the Treasury Department decision of late 2011, the coins were not released for general circulation.

In addition to circulation strike versions, the United States Mint also produced a proof version of the coin struck at the San Francisco Mint and carrying the “S” mint mark. This coin was included within the 2016 Proof Set, 2016 Silver Proof Set, and 2016 Presidential $1 Coin Proof Set.

On October 11, 2016, the Mint offered the 2016 Ronald Reagan Coin and Chronicles Set. This product included one reverse proof Reagan Presidential Dollar struck at the San Francisco Mint, one 2016 Proof American Silver Eagle, one Ronald and Nancy Reagan Congressional Medal struck in bronze, an engraved portrait produced by the Bureau of Engraving and Printing, and an informational booklet. The product was limited to 150,000 units and priced at $68.95.