The 2011 Ulysses S. Grant Presidential Dollar (Buy on eBay) represented the second issue of the year for the circulating dollar coin series, and the eighteenth issue overall. The official circulation release date was May 19, 2011. 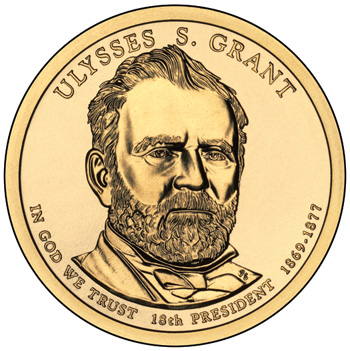 Prior to becoming President, Ulysses S. Grant had fought in the Mexican-American War under General Zachary Taylor. At the start of the American Civil war, he was appointed to command a volunteer regiment. He would eventually rise to the rank of General of the Army. He became the President of the United States in 1869 and would serve two terms. The memoirs written after his retirement as considered one of the greatest military autobiographies ever written.

The obverse of the Ulysses S. Grant Dollar featured his portrait surrounded by the required inscriptions. Around the outer edge of the coin appeared his name, “In God We Trust”, “18th President”, and the years served “1869-1877”. The reverse of the coin included an image of the Statue of Liberty with inscriptions “United States of America” and “$1”. United States Mint Sculptor-Engraver Don Everhart designed and sculpted both the obverse and reverse.

The edge of the coin included incused edge lettering with the motto “E Pluribus Uum”, the year of minting or issuance, and the mint mark.


A launch ceremony for the coin was hosted by the United States Mint and National Park Service at the Ulysses S. Grant National Historic Site in St. Louis, Missouri. The event was held on May 19, 2011 to coincide with the 148th anniversary of the Vicksburg Civil War campaign. In attendance were the US Mint Acting Deputy Director Al Runnels and Executive Director of the Ulysses S. Grant Association John Marszalek. Following the ceremony, free coins were given to children and others were allowed to exchange currency for 25-coin rolls.

The mintage figures for the Ulysses S. Grant Dollar reflected an increase from the previous issue, with a total of 76,002,000 coins struck at the Philadelphia and Denver Mints. As one of the more well known Presidents, the higher production level may have been the result of greater anticipated demand for the specific design. Besides availability through the channels of circulation, the coins will also be included in certain numismatic products offered by the US Mint. This included annual coin sets, numismatic rolls, and 2011 Presidential Dollar proof and uncirculated sets.