The series of golden colored $1 coins honoring the former Presidents of the United States continued with the Calvin Coolidge Presidential Dollar (Buy on eBay). This represented the second issue for the year 2014 and the thirtieth release for the series overall. 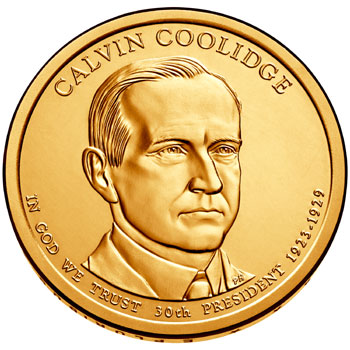 Calvin Coolidge had served as city council member and mayor of Northampton, state legislator, lieutenant governor, and governor of Massachusetts, before serving as vice president under Warren G. Harding. Coolidge succeeded the Presidency following the sudden death of Harding and was reelected in his own right in 1926.

The United States Mint opened sales for the circulating quality versions of the Calvin Coolidge Dollar struck at the Philadelphia and Denver facilities on April 10, 2014. Products included 25-coin rolls, 100-coin bags, and 250-coin boxes available from either facility and priced at a slight premium to face value. This represented the primary channel of distribution for the coins following the Treasury Department decision to suspend production of the series for circulation.


The obverse of the coin featured a portrait of Calvin Coolidge designed and engraved by Phebe Hemphill. The inscriptions included “Calvin Coolidge, “In God We Trust”, “30th President”, and “1923-1929”. The reverse featured the rendition of the Statue of Liberty by Don Everhart that has been used in common throughout the series. Inscriptions read “United States of America” and “$1”. The date, mint mark, and “E Pluribus Unum” appear as incused edge lettering.

Throughout the year, the Calvin Coolidge Dollar was also incorporated into other numismatic products. A proof version struck at the San Francisco Mint was included within annual proof sets. An uncirculated version was included within other annual sets. Finally, circulating quality versions sourced from the first day of production were available within First Day Coin Covers, which carried a product limit of 20,000 units.