The Rutherford B. Hayes Presidential Dollar (Buy on eBay) represented the third release of the year and the nineteenth release overall for the series honoring the former Presidents of the United States of America in the order served. 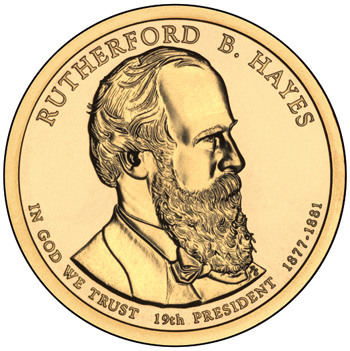 Prior to becoming President, Rutherford Hayes had fought in the American Civil War, where he was wounded five times and acquired a reputation for bravery in combat. He would be elected to the House of Representatives by a wide majority and also serve as the governor of Ohio for three terms. He would be elected 19th President of the United States by the Electoral College, even though he lost the popular vote. He announced in advance that he only intended to serve a single term.

The obverse of the Rutherford B. Hayes Dollar featured his portrait as designed and sculpted by Don Everhart.  Surrounding the portrait were inscriptions indicating his name, the motto “In God We Trust”, “19th President”, and the years of the term “1877-1881”.


On the reverse of the coin carried a depiction of the Statue of Liberty, also designed by Everhart. Inscriptions included “United States of America” and “$1”. The edge of the coin include the motto “E Pluribus Unum”, the date, and the mint mark in incused edge lettering.

The circulation release date for the coins was August 18, 2011, with the official launch ceremony held the same day at the Rutherford B. Hayes Presidential Center in Fremont, Ohio. Attendees included Thomas J. Culberson, the executive director of the Center, and  Marc Landry, Acting Associate Director of Manufacturing at the United States Mint. Members of the public who attended the ceremony were given the opportunity to exchange currency for rolls of the new dollar coins.

Besides the circulation release, the Rutherford B. Hayes Dollars were also available in certain numismatic products such as the 2011 Mint Set, 2011 Proof Set, 2011 Silver Proof Set, and the two 2011 Presidential Dollar annual coin sets.