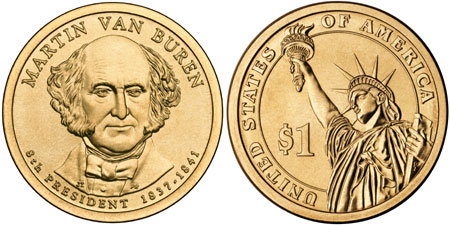 
The obverse features a portrait of President Van Buren, designed by Joel Iskowitz and sculpted by Phebe Hemphill. The reverse of the coin features a rendition of the Statue of Liberty by Don Everhart. This design has been used on the reverse of all Presidential Dollars.

This was the final coin of the series which would include the motto “In God We Trust” on the edge of the coin. In the following year, it was moved to the obverse.

Mintage levels for the series resumed their decline with the Martin Van Buren Presidential Dollar. Just over 100 million coins were produced for circulation at the Philadelphia and Denver Mint facilities.