The Chester Arthur Presidential Dollar (Buy on eBay) marked a significant shift for the coin series created to honor the former Presidents of the United States. This was the first coin which was not produced and distributed for general circulation, but only struck in limited quantities for release within numismatic products. 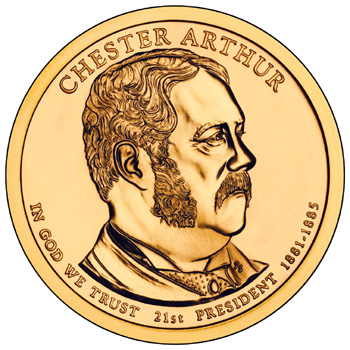 Leading up to the sixth year of the series, there had been some controversy and debate about the status of the program. The legislative requirement for Federal Reserve Banks to make the coins available during an introductory period led to an unintended stockpile of coins, stored at the expense of taxpayers. In response, several bills were introduced in Congress seeking to limit or abolish the series. Meanwhile, a study by the GAO determined savings of billions of dollars if the United States switched from paper dollars to coins. This prompted a bill which would require the transition to dollar coins within four years. Although none of the legislation became law, the Treasury Department used existing authority to suspend production of the coins for circulation.

After a delay from the original release date, the United States Mint began sales of rolls and boxes containing circulating quality examples of the Chester Arthur Presidential Dollar from either the Philadelphia or Denver Mint. On April 5, 2012, sales began for 25-coin rolls priced at $32.95, 250-coin boxes priced at $275.95, and 500-coin boxes priced at $550.95. On April 30, 100-coin bags were offered for sale priced at $111.95 each. All products came in special numismatic packaging, which indicated the President, mint mark, and face value of the contents.


Sales levels for these products quickly surpassed the US Mint’s initial demand estimate of 5 million coins. This required the Mint to restart production of the coins to fulfill demand from collector orders. Across the Philadelphia and Denver Mint facilities, the Mint would strike 10,080,000 circulating quality coins in total.

The obverse of the Chester Arthur was designed and sculpted by Don Everhart. The portrait was surrounded by the required inscriptions  indicating the President’s name, “In God We Trust”, the order of the Presidency, and the years served.

The reverse design of the coin carried the familiar rendition of the Statue of Liberty also designed by Don Everhart with inscriptions “United States of America” and the denomination “$1”.

Chester Arthur had assumed the Presidency in October 1881, following the assassination of James Garfield. He had only served for six months in the position of Vice President and prior to that was Collector of the Port of New York. During his tenure as president, he became a champion for civil service reform.