The Presidential $1 Coin Program reached its 27th release with the 2013 William Howard Taft Presidential Dollar (Buy on eBay). Following a decision made by the Treasury Department, the coins were not produced for release into general circulation, but only struck in the limited quantities necessary to satisfy collector demand. 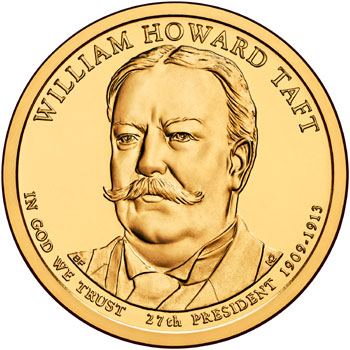 William Howard Taft served as a federal circuit judge, before being appointed as the Governor-General of the Philippines by William McKinley and  appointed Secretary of War by Theodore Roosevelt. He won his bid for Presidency and served one term from 1909 to 1913. Following the Presidency, he served as the Chief Justice of the Supreme Court.

The obverse design for the William Howard Taft Presidential Dollar features a portrait designed by Barbara Fox and sculpted by Michael Gaudioso. The inscriptions surrounding the portrait include his name, the motto “In God We Trust”, the order of the Presidency, and the dates of the term served. The reverse design for the coin features an image of the Statue of Liberty designed and sculpted by Don Everhart. Inscriptions include “United States of America” and the denomination expressed as “$1”.


Incuse edge inscriptions of the coin feature the additional required motto “E Pluribus Unum”, along with the date of issue “2013”, and the mint mark of either “P”, “D”, or “S”.

On July 9, 2013, the United States Mint began accepting orders for 25-coin rolls, 100-coin bags, 250-coin boxes, and 500-coin boxes containing circulating quality versions of the William Howard Taft Presidential Dollar. Separate products were available containing coins from either the Philadelphia or Denver Mint facility. The packaging of the products included the name of the President, the mint or origin, and the face value.

The total mintage for the circulating quality version of the coin reached 8,120,000 pieces across the Philadelphia and Denver Mint facilities.