Skip to content
Posted inVarieties
Posted by By admin June 1, 2011

For the first four years of the series, the United States Mint produced Satin Finish Presidential Dollars (Buy on eBay). These coins were specially minted and offered to collectors within certain annual sets and other numismatic products. 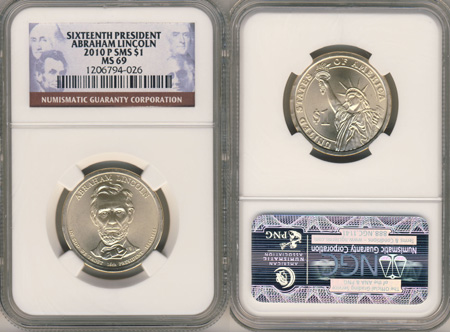 The satin finish is created by sandblasting the faces of the coin dies and burnishing the coin blanks prior to striking. This results in coins with softer, satin-like luster that is distinguishable from the more brilliant finish used for circulation strike coins. Satin finish coins were introduced within the 2005 Mint Set and continued within use when the Presidential Dollar Program began in 2007.

The new type of finish was abandoned after 2010. From 2011 onwards, the US Mint resumed the brilliant finish for coins included within the annual mint set and other products. The Mint indicated that the finish would no longer be used since it made surface marks from coin handling more apparent. According to the Mint, the brilliant finish would result in coins with more aesthetically pleasing appearance.

The satin finish Presidential Dollars were produced from 2007 to 2010 at the Philadelphia and Denver Mints. A subset of satin finish coins would include 32 different issues. These coins may be found within the following products:

Third party coin grading companies PCGS and NGC differentiate satin finish Presidential Dollars from regular circulation strikes. The coins are designated “SMS” or “Satin Finish”. It is generally possible to achieve higher numeric grades for satin finish coins, although for many issues it can be difficult to receive high grades like MS69.