The Thomas Jefferson Presidential Dollar (Buy on eBay) represented the third issue of the new series created to honor the former Presidents of the United States. The coins were first released in circulation on August 16, 2007. 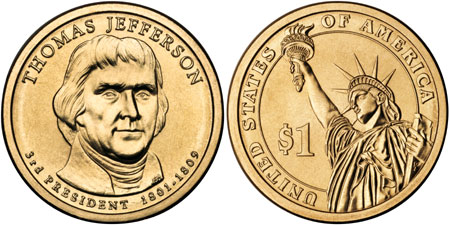 Prior to becoming president, Jefferson drafted the Declaration of Independence. During his term, he doubled the size of the United States with the Louisiana Purchase and commissioned Lewis & Clark to explore the new territories. He served two terms as the 3rd President of the United States from 1801-1809.


The obverse includes the inscriptions “Thomas Jefferson,” “3rd President,” and the years of his presidential term “1801-1809.” The reverse inscriptions include “United States of America,” and the denomination “$1.” The date and mint mark are located on the edge inscription of the coin along with the mottoes “In God We Trust” and “E Pluribus Unum.”

The overall mintage level for the Thomas Jefferson Dollar declined from the level of the prior release, but remained above 200 million. The Philadelphia Mint produced 100,800,000 coins for circulation, and the Denver Mint produced 102,810,000 coins.