One popular way of collecting Presidential Dollars is by the roll (Buy on eBay). A collector will attempt to acquire one or more unopened rolls for each release in the series. These are often called BU Rolls, referring to the condition of the coins within the roll as “Brilliant Uncirculated.”

Presidential Dollar Rolls usually come in 25-coin size with a face value of $25 per roll. Currently, Presidential Dollars are minted for circulation at both the Philadelphia and Denver Mints. A common method of collecting the series is to try to acquire one roll from each mint for each president.


There are three primary sources for acquiring Presidential Dollar Rolls:

From 2007 to 2011, rolls of newly minted Presidential Dollars were distributed by the Federal Reserve. They provided banks and financial institutions with specific time periods during which “unmixed quantities” of the new releases could be ordered. The window of availability usually extended from a few weeks before the circulation release date to a few weeks after. Banks that ordered the coins distributed them to their business and retail customers at face value.

In the face of a massive build up of excess $1 coins within storage at Federal Reserve vaults, at the end of 2011 the Treasury Department made the decision to suspend production of Presidential Dollars for circulation. As such, from 2012 onwards the new releases of the series were not distributed to banks and financial institutions. Rather, the coins could only be obtained through numismatic products offered by the United States Mint or from secondary market sources. 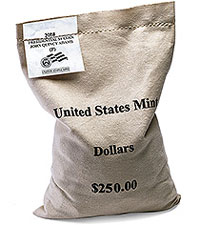 The US Mint offers Presidential Dollar bags and rolls under a special program. They have offered 25-coin rolls and 250-coin bags (Buy on eBay) of  circulation quality coins for each release of the series. The bags and rolls offered under the program use special packaging from the US Mint.

In later years, the product options and pricing for the numismatic rolls would be adjusted and the Direct Ship Program would be canceled.

Presidential Dollars Rolls are also commonly bought and sold on the secondary market. This can be a convenient source for someone who doesn’t want to do the footwork required to locate a bank which orders new rolls or for someone who wants to pay a lower premium than the US Mint charges.


Roll offerings are commonly seen on shop at home TV offerings and some mainstream magazines. However, before ordering from one of these sources, you should be careful that you are not entering into a subscription program or paying excessive shipping and handling charges. Pricing from these sources is also typically higher since the companies need to recoup their marketing costs.

A vibrant market for Presidential Dollar Rolls can be found on eBay. At any time, you can usually find BU Rolls available for any President. Premiums are usually reasonable, but make sure to account for shipping and handling charges.