Featuring one of the most famous former Presidents of the United States, the Abraham Lincoln Presidential Dollar (Buy on eBay) generated significant interest from both coin collectors and the general public. This was the sixteenth release for the series overall and the final release for the year 2010. 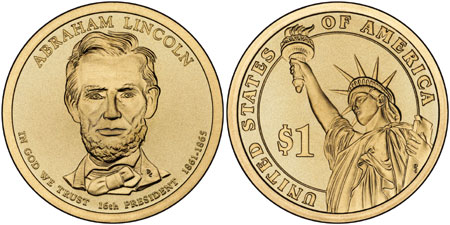 Born into a poor frontier family, Abraham Lincoln would become a self taught lawyer and serve in the Illinois legislature and the House of Representatives. While campaigning for the Senate, his debates on slavery with Stephen A. Douglas brought him to national attention and helped secure the Republican presidential nomination. After being elected, his first term would be dominated by the American Civil War and efforts to abolish slavery. Lincoln would be assassinated just weeks into his second term, as the war was drawing to an end.

In the year before the release of the the Lincoln Presidential Dollar, the bicentennial of his birth had been celebrated with four different reverse designs for the 2009 Lincoln Cent and with the issuance of the 2009 Lincoln Commemorative Silver Dollar. In 2010, the cent would feature a new reverse design to represent his preservation of the union.


On November 18, 2010, the Abraham Lincoln Presidential Dollar was released into circulation, capping two years of increased presence within U.S. coinage. The release was marked by an official launch ceremony held at President Lincoln’s Cottage on the grounds of the Armed Forces Retirement Home in Washington, DC. The event was attended by US Mint Director Edmund Moy, the Director of Lincoln’s Cottage Erin Carlson Mast, and many enthusiastic members of the public.

The obverse of the coin featured a portrait of Lincoln designed and sculpted by Don Everhart. The inscriptions on the obverse included his name, the order of the Presidency “16th”, years of the term “1861-1865”, and the motto “In God We Trust”.

The reverse of the coin was also designed and sculpted by Everhart. It portrayed the Statue of Liberty with inscriptions “United States of America” and the denomination “$1”. The incuse edge lettering of the coin included the date, mint mark, and the motto “E Pluribus Unum”.

Production for circulation took place at the Philadelphia and Denver Mints, with a combined 97,020,000 coins struck. This represented the highest production for an issue of the series in more than a year, due to the anticipated higher public demand. Collector versions of the coin were struck at the Philadelphia and Denver Mints in satin finish and at the San Francisco Mint in proof. Numismatic products issued included 25-coin rolls, First Day Coin Covers, and the Presidential Dollar & First Spouse Medal Set, as well as numerous variations of annual and series sets.