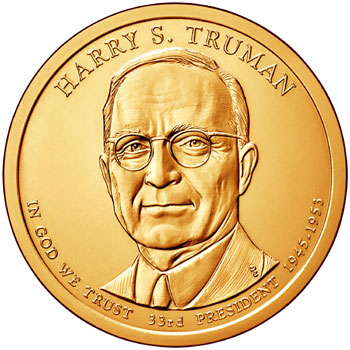 In keeping with the Treasury Department decision made at the end of 2011, the golden colored $1 coins were no longer produced for release into general circulation. Rather the coins were only distributed within numismatic products offered by the United States Mint.

Prior to becoming President, Harry S. Truman was elected county court judge, served two terms in the U.S. Senate, and was elected vice president for the fourth term of Franklin D. Roosevelt’s presidency. After Roosevelt’s sudden death, he succeeded the presidency and would also be elected for a second term.


The obverse design of the Harry S. Truman Dollar features a front-facing portrait of the former President, designed and sculpted by Don Everhart. The inscriptions include the President’s name, the motto “In God We Trust”, “33rd President”, and the dates served “1945-1953”. The reverse, which was also designed and engraved by Don Everhart, features an image of the Statue of Liberty with inscriptions “United States of America” and “$1”. The date, mint mark, and motto “E Pluribus Unum” appear as incused edge lettering.

On February 5, 2015, the United States Mint started accepting orders for circulating quality examples of the coins packaged in 25-coin rolls, 100-coin bags, and 250-coin boxes. As in prior years, these products were available containing coins from either the Philadelphia or Denver Mint facilities and priced at a slight premium to face value.

The United States Mint would also offer the 2015 Harry S. Truman Coin and Chronicles Set on June 30, 2015. This set contained one 2015 Harry S. Truman Presidential Dollar struck with a reverse proof finish, a 99.9% silver Presidential Medal, and a postage stamp. The set was limited to only 17,000 units and originally priced at $57.95. The sets would achieve a rapid sell out due to the popularity of the reverse proof finish dollar, which was only available within the set.