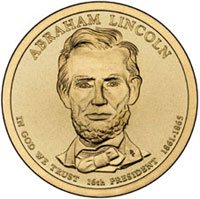 The Presidential $1 Coin Program honors the former Presidents of the United States of America with the issuance of golden colored dollar coins. The coins feature portraits of the eligible Presidents on the obverse and an image of the Statue of Liberty on the reverse.

The series launched in 2007 with coins honoring George Washington, John Adams, Thomas Jefferson, and James Madison. The series concluded in 2016 with coins issued to honor Richard M. Nixon, Gerald R. Ford, and Ronald Reagan. One final coin was added to the series in 2020 to honor George H.W. Bush.

From 2007 to 2011, the coins were struck and released for general circulation. However, in late 2011 the Treasury Department made the decision to suspend production for circulation due to a surplus of $1 coins held in storage. From 2012 onward, Presidential Dollars have been struck only in the amount necessary to meet demand from collectors. In addition to circulation strikes, the coins have also been struck in other finishes and included within various numismatic products offered by the United States Mint.

The program was authorized under The Presidential $1 Coin Act (Public Law 109-145), which was signed by President George W. Bush on December 15, 2005.  The Act provided for the redesign and issuance of $1 coins honoring the former Presidents of the United States during the period beginning January 1, 2007. According to the legislation, the new series would seek to revitalize the design of United States coinage and return it to its position as an object of aesthetic beauty.


The Act included measures to ensure an adequate supply of the coins are available for circulation. The Federal Reserve Banks would be required to have unmixed quantities of the coins available to financial institutions during an introductory period for each coin release. The Director of the United States Mint was required to increase public awareness of the new dollar coins through various activities and programs. These measures helped build a following for the series with collectors, although ultimately the denomination had trouble gaining traction in circulation. A stockpile of coins would build up in Treasury vaults leading to the eventual decision to scale back production considerably.

Provisions were also included in the Act to honor the First Spouses of the United States within a separate coin series. The US Mint was authorized to mint and issue one-half ounce 24 karat First Spouse Gold Coins. These coins would be released in conjunction with the Presidential Dollars and sold directly by the US Mint. 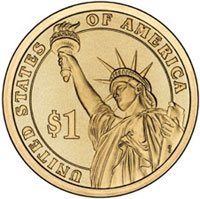 The obverse design of each Presidential Dollar features the likeness and name of the President being honored. Additional inscriptions indicate order of the Presidency and the years served. From 2009 onward, the motto “In God We Trust” also appears on the obverse.

The reverse of each coin features a dramatic rendition of the Statue of Liberty, extending from the rim. The required inscriptions include “United States of America” and the denomination expressed as “$1”. The word “Liberty,” which appears on all other circulating United States coinage was specifically not required to appear within the inscriptions. The legislation indicated that the Statue of Liberty would adequately portray the concept of Liberty.

The designer of the obverse has varied throughout the series. The reverse was designed by US Mint Sculptor-Engraver Don Everhart.

Another specification within the act was the use of edge-incused inscriptions. By including certain items on the edge of the coin, more room would be available on the faces of the coin for larger and more dramatic artwork. The edge inscriptions include the date, mint mark, and motto “E Pluribus Unum.” For Presidential Dollars released during 2007 and 2008, the motto “In God We Trust” also appears on the edge.

The Presidential Dollars were issued at a rate of four different designs per year from 2007 to 2015, with three designs issued in 2016, and one final coin added to the series in 2020. The order of issuance followed the order of the Presidencies. If a President served in two or more consecutive terms, only one coin was issued. However, if a President served in two nonconsecutive periods of service, a coin was issued for each period. Under the provisions of the Act, coins were only issued for Presidents who had been deceased for at least two years.

Mintage levels showed a general decline throughout the course of the series. For the first year of issue, nearly one billion coins were produced for circulation across four different designs and two mint facilities. As the coins failed to achieve widespread usage, mintage levels fell for subsequent years, although the coins continued to be issued through the channels of circulation. When a significant buildup of dollar coins in storage started to become an issue, the Secretary of the Treasury used his authority to curtail production further. From 2012 onwards, the coins were only struck in the minimum quantities necessary to meet demand from collectors.