The Franklin D. Roosevelt Presidential Dollar (Buy on eBay) represented the fourth and final release of the series for the year 2014 and the thirty-second release of the series overall. The popularity of the President would led to a higher mintage for the circulation strike release and a special numismatic product offering. 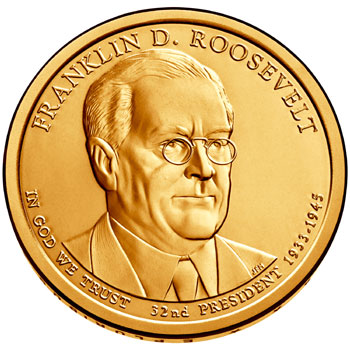 Prior to becoming President, Franklin D. Roosevelt served as a New York state senator and governor and assistant secretary of the Navy under President Woodrow Wilson. During his Presidency, he would lead America through the Great Depression and World War II. Amidst these tumultuous events, he was elected an unprecedented four times. He would serve three full terms and die just a few months into his fourth term.

The obverse design of the coin featured a portrait of Franklin D. Roosevelt designed and engraved by Joseph Menna. The inscriptions include the President’s name, the motto “In God We Trust”, “32nd President”, and the dates served “1933-1945”. The reverse carried the rendition of the Statue of Liberty by Don Everhart, which has been used in common throughout the series. The inscriptions include “United States of America” and the denomination “$1”. Incused edge lettering contained the 2014-date, mint mark, and motto “E Pluribus Unum”.


The United States Mint began accepting orders for numismatic products containing the circulating quality versions of the Franklin D. Roosevelt Dollar on August 28, 2014. The products included 25-coin rolls, 100-coin bags, and 250-coin boxes containing coins struck at either the Philadelphia or Denver Mint facilities. Due to the suspension of production of the series for circulation, these products represented the primary method of distribution for the circulating quality versions of the coin.

In anticipation of higher demand for the coins featuring the popular President, the circulation strike mintages were higher compared to the prior two releases. The Philadelphia Mint struck 4,760,000 piece and the Denver Mint struck 3,920,000 pieces for an overall mintage of 8,680,000.