The 2016 Gerald R. Ford Presidential Dollar (Buy on eBay) was the penultimate release of the Presidential Dollar Program. The series had launched in 2007, with four coins released per year to honor to former deceased presidents of the United States of America in the order served. 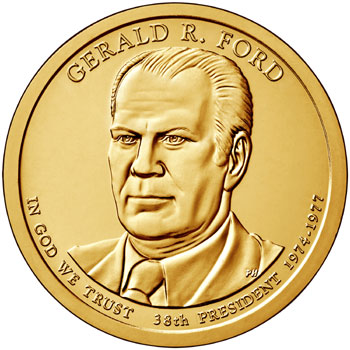 Gerald R. Ford grew up in Nebraska before attending the University of Michigan and Yale University, where he would earn a law degree and also coach the football team. After serving in the U.S. Navy in World War II, Ford served in the United States House of Representatives from 1949 to 1973. He was then appointed Vice President and assumed the Presidency following Richard Nixon’s resignation.

The obverse design of the Gerald Ford Presidential Dollar features a portrait of the former President designed and sculpted by Phebe Hemphill. The surrounding inscriptions include “Gerald R. Ford”, the motto “In God We Trust”, “38th President”, and the dates served “1974-1977”. The reverse of the coin features the Statue of Liberty as designed and sculpted by Don Everhart. The inscriptions read “United States of America” and the denomination “$1”. Incused edge lettering contains the date, mint mark, and motto “E Pluribus Unum”.


The United States Mint began sales of circulating quality examples of the coins on March 8, 2016. Product options included 25-coin rolls, 250-coin boxes, and 100-coin bags from either the Philadelphia or Denver Mint facilities. These products were priced at a slight premium to face value. As with recent prior releases of the series, the Gerald Ford Presidential Dollars were not released for general circulation, but only available within numismatic products sold by the US Mint.

Across the Philadelphia and Denver Mint facilities, the circulation strike mintage for the Gerald Ford Presidential Dollar would reach 10,500,000 pieces.