The circulating coin series honoring the former Presidents of the United States entered its fifth year with the Andrew Johnson Presidential Dollar (Buy on eBay). He became the 17th President following the assassination of Abraham Lincoln. 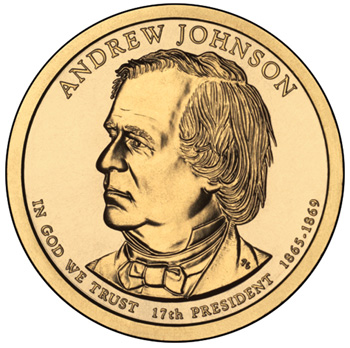 Earlier in his life, Andrew Johnson had operated a tailor shop in Tennessee with his wife Eliza McCardle Johnson. He began to participate in debates and eventually entered politics, championing the common man and advocating a homestead bill. He would serve as a member of the House of Representatives and Senate. Later, he would be nominated for vice president, and assume the presidency following Lincoln’s death.

The obverse design of the Andrew Johnson Dollar featured a portrait designed and sculpted by Don Everhart. The required inscriptions surround the portrait indicating “Andrew Johnson”, “In God We Trust”, “17th President”, and “1865-1869”. On the reverse was a depiction of the Statue of Liberty. Also designed and sculpted by Everhart, it is intended to represent the concept of Liberty. Inscriptions read “United States of America” and “$1”. The edge of the coin contains the date, mint mark, and “E Pluribus Unum”.


The Andrew Johnson Presidential Dollars were officially released into circulation on February 17, 2011. A launch ceremony was held on the same day in Greeneville, Tennessee at the Andrew Johnson National Historic Site. There ceremony was attended by United States Mint Chief Counsel Daniel P. Shaver and National Park Service representatives. Children in attendance received a free coin to commemorate the day. The following week on February 23, 2011, the United States Mint began sales of numismatic rolls containing the coins. Other numismatic offerings released at various times throughout the year also included the new $1 coins.

The circulation mintage for this release was 72,660,000 across both the Philadelphia and Denver Mint facilities. This set another fresh mintage low for the series, continuing the general trend of declining production that had characterized entire series.