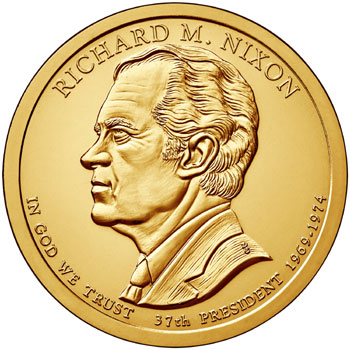 The Presidential Dollar Program had launched in 2007 to honor the former deceased Presidents of the United States. The coins were released at a rate of four coins per year with the series slated to continue until all eligible Presidents had been honored. Initially the coins of the series were struck and released for general circulation, but since 2012 production has been limited to the number necessary to meet demand from collectors.

Before entering politics, Richard M. Nixon had practiced law and served as a lieutenant commander in the U.S. Navy during World War II. After the war he successfully ran for Congress and later won a seat in the Senate where he served until being elected vice president. He was elected President in 1968 and served until 1974 when he resigned to avoid impeachment for his role in the Watergate scandal.


The obverse design of the Nixon Presidential Dollar features a left-facing profile portrait of the President designed and sculpted by Don Everhart. Surrounding inscriptions read “Richard M. Nixon”, “In God We Trust”, “37th President”, and “1969-1974”. The coin’s reverse, which was also designed and sculpted by Don Everhart, features a rendition of the Statue of Liberty with inscriptions “United States of America” and the denomination “$1”.

During the year, proof and uncirculated versions of the coin would also be offered within various numismatic products.

The mintage level for the circulation strike Richard Nixon Dollars would see a decline from the prior two releases of the series. The Philadelphia Mint struck 5,460,000 pieces and the Denver Mint struck 4,340,000, for an overall mintage of 9,880,000.