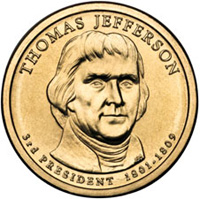 The first release of the series featuring George Washington had a mintage of more than 300 million pieces across the Philadelphia and Denver Mint facilities. After this brisk start, the mintages for subsequent issues of the Presidential Dollar program would experience a fairly steady decline. While the new $1 coin series found a welcome reception with collectors, the coins failed to achieve widespread use within commerce.

Even with production significantly curtailed from earlier levels, stockpiles of excess dollar coins continued to build within Treasury vaults. The situation came to a head at the end of 2011 when the Treasury Department announced the decision to suspend production of the series for circulation.

From 2012 onwards, the Presidential Dollars have not been struck for circulation and only produced in the limited numbers necessary to fulfill demand from collectors. These coins were only available within numismatic bags and rolls offered by the US mint at a premium to face value. Accordingly, mintage levels for this portion of the series are significantly lower. The lowest mintage level for the series occurred with the 2013 Woodrow Wilson release, which had 7,980,000 pieces minted across the Philadelphia and Denver facilities.

The table below presents circulating coin production figures from the United States Mint for coins in the Presidential Dollar series.